So this weekend I attended the Body power expo in Birmingham NEC with some crossfit friends. We wanted to go to see the attractions and stalls see what they could offer us.

Me, I went for the food!

I love expos and conventions as its free sample heaven!

Also it’s where you can normally find really unique stalls which often sell the best goodies.

I was interested in what the expo could offer a gluten free vegan. Vegan diets seem to be the new thing at the moment which is a bit annoying as most folks now when presume when I say vegan/gluten free I’m doing it because it’s fashionable not because I have allergies.

So as it’s the new “fashion” I wanted to see what the fitness communities take would be on it.

I wasn’t expecting a lot from the expo, food wise, as most people involved in fitness to a high level are on diets which are really highly protein lead. Protein in muscle building is essential. Protein helps with muscle growth and repair so is really important for fitness. According to one site I require approx 184g of protein a day to build and maintain muscle.

However, you try getting the amount of protein you need when you eat like a squirrel!

Currently I supplement my diet with protein shakes. My go to suppliers are My Protein, they do a soy isolate protein which is both vegan and gluten free and comes in a few tasty flavours. My current choice is there vanilla flavoured on as it can be mixed into lots of things as well as just a shake.

The expo was huge and there was so many stalls to look at but I had my gluten free vegan radar on high beam and was scouting for stalls and goodies!

One of the first stalls I found that produced allergy appropriate food was the Bulk Powders stand. These guys had a huge stand filled with lots of different products but they had one entire side of their stand solely for their new vegan range which is also gluten free!

Unfortunately their new range only comes in 2 main flavours at the moment; banana and chocolate. They had free samples of their banana caramel shake and their chocolate peanut and obviously I tried both as it would be rude not too! The flavours were nice, not to dominant but enough to make the protein flavour less obvious. However, they both seemed powdery in the mouth. They also had some free samples of their new vegan protein bars, once again they were banana and chocolate coconut. I don’t normally enjoy protein bars and prefer the bars with nuts and seeds in, but these were classic style as I would call them. Both flavours were nice, not to dissimilar to the shakes. The texture of these bars weren’t to my liking I have to admit, they were a powdery texture and tasted powdery too. But ignoring the powdery texture the flavours were pleasant, not to strong but noticeable. On average their gluten free vegan bars have 21g of protein in each 74g serving. 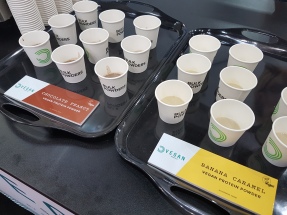 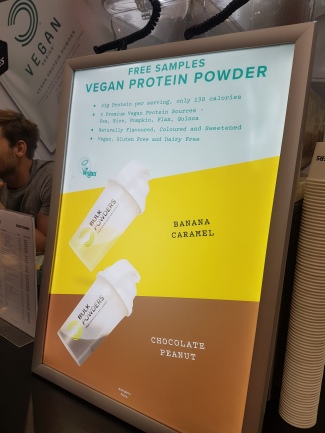 I don’t think I would purchase these for myself but I can see why others would as the flavours are nice and I’m really looking forward to see what Bulk Powders new vegan range will become.

Pulsin are a brand I’ve eaten many times before so was really happy to see a familiar face at the expo. Pulsin make some really nice gluten free vegan protein bars that come in a range of flavours. I’ve tried a few flavours that I’ve brought in my local shops but the expo stand had some I’ve not seen before like vanilla choc chip and maple & peanut. The texture of protein bars are all really similar despite the change in flavours, I haven’t tried the oat bars so couldn’t comment on them, but the protein bars are a squidgy texture and have a similar taste to each other too. The flavours are very subtle; personally I like a more dominant flavour but what flavours come through are pleasant. On average their protein bars have about 12.5g of protein and 6g of sugar per 50g bar. 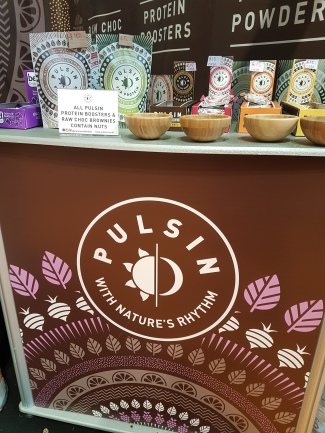 Well now I have had my protein bar for my starters for my main there’s nothing that can beat a protein packed gluten free vegan pizza and Muscle food has the best!

Beef up the vegan way….

The Muscle food stall was so dominant at the expo, they had huge pizza pictures up which instantly caught your attention because who would think you could clean eat a pizza. The smells coming from there stall was enough to make your mouth water instantly, however the ques were big, but worth the wait.

The pizzas were made in a little pizza oven and served in individual pizza boxes, the only issue was there was no seating are so we had to stand with our boxes. My vegan pizza had mushrooms, tomatoes, vegan cheese and what tasted like caramelised onions, it was so tasty and the base was thin and floppy not dry at all. I’d never heard of Muscle food before the expo but I went onto their website later as we had got some coupons from them at the expo, and they have a really good range of products but unfortunately not the vegan gluten free protein pizza but they do have the bases to make your own which I think I shall be purchasing soon. 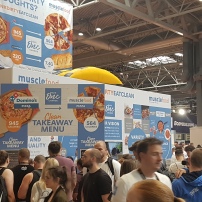 Kettlebell kitchen was also at the expo, now I’ve heard so much about these guys and my crossfit friends rave about them. Unfortunately the ques for the food were really long and by this point in the day the hangry monster was out for some of us and ques were not what we wanted. However, I did manage to sneak a few photos of their menu and it looked really tasty. But there was some confusion for me, now correct me if im wrong but I’ve yet to find a gluten free and vegan Quorn meat replacement. I love Quorn but if I want it I have to choose between vegan or gluten free as their gluten free products have egg in them and the vegan ones have gluten. Seeing as I have an allergy to gluten I have to go gluten free.

So how have Kettlebell kitchen managed it?

I really wanted to ask the guys at Kettlebell kitchen but I got whisked away, because if there was a mix up it could be really bad for some folks or if they have found a gluten free vegan Quorn option I want in! 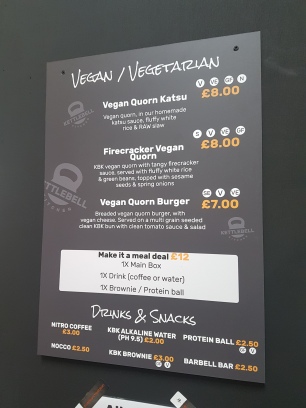 Now for my favourite part of any meal……..the pudding!

I scream , you scream, we all scream for sorbet?….

I don’t know about you guys but I go through phases where all I crave are certain foods and I could eat them all day every day, this time the cravings are for ice cream. Lots and lots of ice cream!

But I’ve only even known eateries and especially stalls at conventions to only have sorbet as the vegan option for ice cream which I’m normally not a fan off. There are lots of dairy free ice creams on the market yet sorbet is what most folks offer. But not at this expo the amazing folks at Yogland have magiced up a gluten free vegan frozen dessert which is a sorbet but doesn’t taste like one at all. Its pure magic and tastes like a magic person made it!

Move over Harry there is a new wizard in town!

There was only 2 options for vegans; mango and strawberry and banana. As I have issues with mango so that’s out. Like most expo’s people are giving free samples and coupons out to everyone, I picked up a free topping coupon for these guys so I chose the strawberry and banana sorbet topped with fresh raspberries. 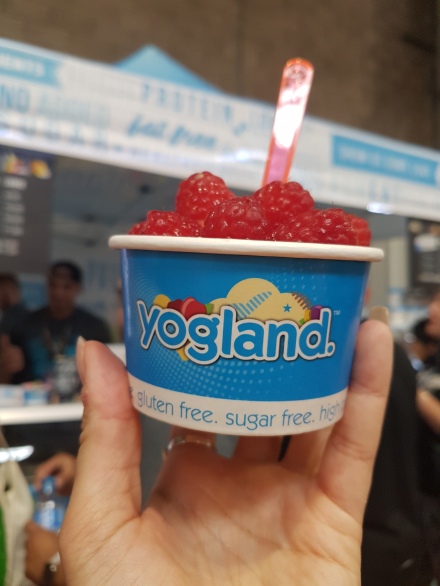 Blinky yummy is an understatement!

It was so creamy and packed full of flavours, the tanginess of the strawberry was a sharp tingle which match the soft texture of the dessert perfectly. Now I was a good girl and only had a single scoop but I bet I could finish of a tub given the chance. I have been onto their website to see if they sell that particular flavour, unfortunately they don’t but they have many other flavoured frozen yogurts which they state can be made dairy free. All their yogurts appear to be gluten free and low in sugar and on average 10g of protein per serving which I presume is per scoop. Some of the sorbets advertised on their website have between 4g – 10g of protein in them, I’d be interested to see if there advertised yogurts once switched to vegan have the same amount of protein in them as they do with dairy. 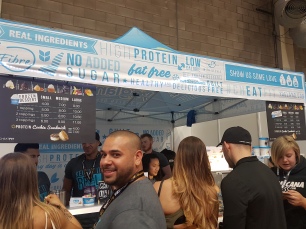 I feel a test purchase coming up!

Overall the Body power expo was a super good day, full of new foods to try and lots of great stalls and inspirational people to meet. And I will most defiantly using my coupons for some online discount shopping!

Any day with ice cream is a good day!