So another season has started and another trip upto Scotland was taken. I just love Scotland, the hills, the rolling countryside, the gluten free potato fritters!

This time around I decided to try a few more place to eat rather than my normal haunts, I did go back to some I enjoyed last time with differing results.

I have to admit, for smaller towns in the middle of nowhere at times the Scottish folk half cater for gluten free vegans/vegetarians and its so appreciated!

Where we go in Scotland is just over the border near Dalbeattie at Barend Holiday village, it takes us about 3 and a half hours or so to get there, so not to far really. However, this time I took the mini pooch so it was a little longer in the car.

Anywho, on our arrival we decided as a family to not cook and go the restaurant at the holiday site.

Now, I have been here before and ate here before and it was lovely. The issue was I had hot cheese and it killed me off for the entire holiday so I was umming and arring whether I should eat there with everyone else or just do my normal routine of sitting and staring at their food like a hungry puppy.

I decided to eat.

And i’m so glad I did! I chose their only gluten free vegan option which was the veggie sizzler. A steaming sizzling hot plate rammed full of veggies served with a choice of chips, rice or half and half. I chose the half and half because cant resist a chip and rice combo!

I was kind of expecting from a veggie sizzler just the normal “boring” veggies; a few lonely carrots sat next to a mini broccoli tree or two.

But I was so pleasantly suprised.

The meal contained courgettes, onions, mushrooms, carrots (obvs) and a sneak surprise of some pineapple all smothered in sweet chilli sauce. I have to admit however, for me there was a little to much sauce it was less smothered and more drowning, but still tasted amazing. For the cost to size ratio it was so worth the money, I think it was around £10ish.

It was that nice I had it twice in one week!

Castle Douglas is a little town in Scotland, its small it kind of looks like the 70’s came and stopped there (I love it for that reason!) but it has some varied eateries. From a Greek restaurant, to little coffee shops to Mr Pooks; which ive never tried but really want to.

But the gem in the crown is Double Dutch pancake kitchen.

From the outside and inside this place doesn’t look to appealing (sorry) but by heck do they make some nice pancakes and poffertjes.

What initially drew me in was the sign on the door which stated “gluten free and vegan options available” any time I see a sign like that my allergy radar goes bonkers and I need to go in.

The magical thing about this place was on our first visit the owner was in the restaurant play a flute, to himself no customers in there just him and his wife.

I asked, as you do, a million and one questions about their menu and finally settled on poffertjes. Which are little dutch pancakes. And at Double Dutch you get 21 of these bad boys with ice cream and toppings for £3!

We ended up buys 2 sets of gluten free poffertjes with vegan Swedish Glace ice cream (my favourite ice cream ever!) one day and the next we went in and had pancakes. And the restaurant is dog friendly so we could all enjoy.

This place is so nice and the owners are lovely, if your in Castle Douglas please pop in and try there desserts it will be so worth it! 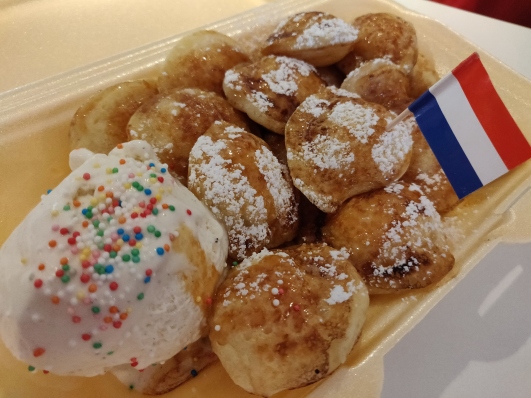 Another restaurant in Castle Douglas is Nikos’ Greek restaurant. We have been here before in June but only for take out, not a sit down meal.

So this time around we wanted to have a sit down meal, date night.

The menu was no different from June so we were expecting the same food. When we previously came it was lovely, Greek kebabs full of bulging veggies and meat for the meat folks.

This time it was not so impressive.

Don’t get me wrong the food tasted lovely, I had Imam which is half an aubergine filled with tomatoes, onions, mild chillies and feta served with chips.

And of course a side of  tyri saganaki (pan fried halloumi), yes my lactose intolerance was totally ignored for this evening.

What the issues was this visit was the portion size to cost factor. My half an aubergine, 3 slices of halloumi, some chips my boyfriends 1 chicken kebab, yes 1 strip of chicken on some lettuce and a coke came to £45! Now I don’t mind paying for good food and this food tasted good, but for what we received size wise it seem far to much.

I would say visit Nikos’ its beautiful food, but maybe stick to the take menu.

By the sea at night….

One evening we decided to go to Kippford, just down the road from Dalbeattie where we were staying to a hotel/restaurant The Mariner.

Now if you haven’t been to Kippford you must, there’s not much there but to walk along side the sea and the boats of an evening, is so peaceful.

The Mariner is a hotel just as you get in to the main port road, its a big old place and its dog friendly. We went a couple of times, as the food was really nice.

They had a few option for gluten free, vegan and vegetarians and what they did offer seemed lovely. I decided on the vegetable tagine as it seem chock packed full with all my favourites.

It was full of flavour, a tangy spicy flavour with warmth burn not a spicy hot. It was served with chips or a jacket potato and vegetables. To me it seemed weird to have veggies with it, rice would have been a better option but still really tasty.

Once again size to cost was good, I think this was around the £10 mark also. 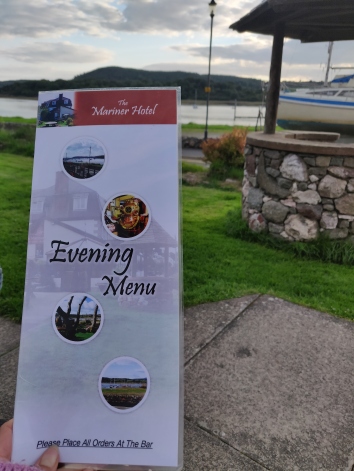 Well Scotland this trip you most definitely gave me a taste from around the world, so thank you. 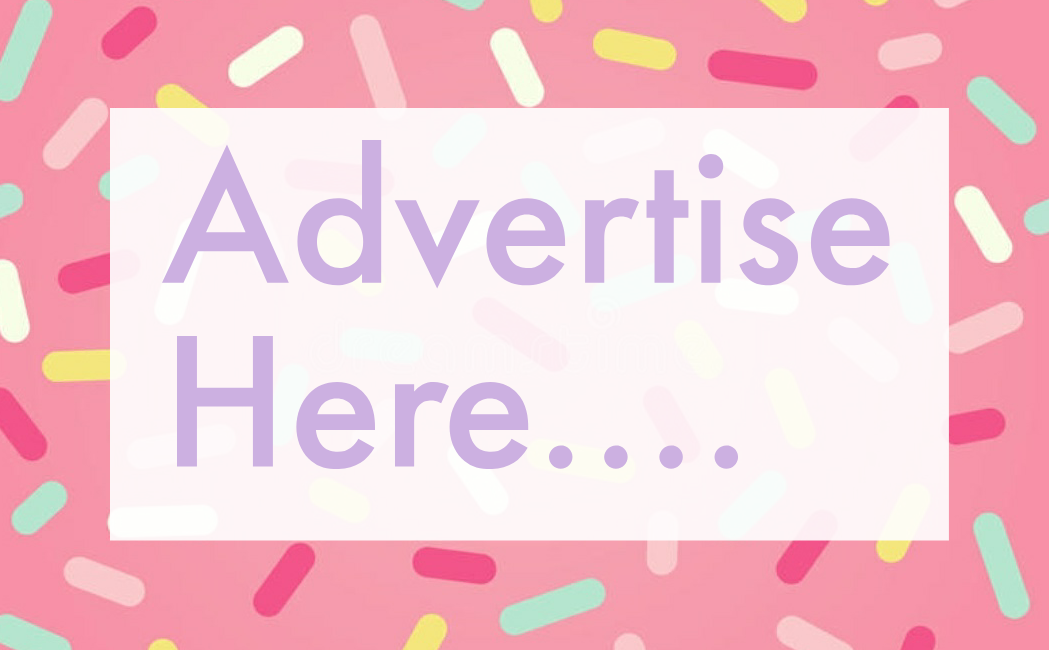