So this weeks kinda been a naughty week!

I have been a big ole ball of stress, hormones and anxiety and my diet has paid for it.

I have to keep gluten free I cant afford not be, but I can wave on my lactose intolerance if i’m willing to take the risk of becoming besties with my loo.

This week I took the risk and was actually ok, which was a very pleasant surprise.

However, the naughty treat I have been scoffing all week trying top boost my mood have been a mixture of vegan and vegetarian (all gluten free obvs)

Now, I know better than to supplement my low mood with naughty food but sometimes you just need a bit of sweetness in your life and this week I’ve maxed my sweetness out.

In prep for my Disneyland Paris hoilday I have been searching the shops for foods that will survive the trip, customs wont nick them and don’t need cooking, hard job!

I have managed to find some bits and bobs but mainly sweetie foods. I will be taking some sweeties with me but to be honest all the ones I have brought to take I’ve already munched down, whoops!

I popped into my local Sainsburys on the hunt, found not much food wise but spotted these white choc coconut clusters.

They were small so easily nibbled, but by heck were they sickly.

They tasted very milky even tho there is no milk in them and the most prominent flavour and texture was sugar, lots of sugar.

There a small bag but I didn’t manage to finish it, I think if I did I’d probably been unwell.

The taste, even though there were very sugary was pleasant, just not for me really.

Although I think white chocolate fans would love them and at a £1 for the bag its a bit of a bargain!

Yesterday I had a really nice breakfast, I thought, vegan cheese on toast with tomato lovely.

However, about 15 minuets later I had the most horrible after taste from the cheese, and it was making me feel really unwell.

You know when you just need something super sweet to counter balance a yuckie taste, well I needed that. I was on route to Chester for some retail therapy and there are no shops between me and Chester apart from a petrol station.

So I popped in hoping to find something to take this taste out of my mouth. There was such a limited selection to choose from and actually after a Google sesh I found only 2 options, sour Chewits or regular Chewits .

According to their website all chewits are gluten free and vegetarian apart from their wands, vampire fangs and laces. Which was a suprise to me and a good one too because I love Chewits!

They are not vegan as they contain egg whites.

Now I am trying my darnedest to say on the vegan diet but this day I needed sweetness over veganess (sorry vegan folks) so I chose the sour Chewits.

They help hide the horribly weird after taste and filled my mouth with sourie goodness.

Chewits, if you haven’t had them are little square sweets that are a hard chewie candy that come in multiply flavours. I grew up with Chewits as a kid and eatting them again made me feel all young inside.

Being sweets they are very high in sugar so a treat not a staple food guys! But totally delighted there gluten free!

My friends isn’t vegan or gluten free but has recently given up meat, but being my friend gets dragged around all the free from shops hunting for goodies and has tried many a product.

Whist she was in Holland and Barrett she stumbled on a Vego bar and thought she would try it and a love story began….

She can not get enough of these bars and buys 3 or 4 at a time. Now i’ve been with her buying these and never had one, I’m not sure if the cost put me off at £1.99 per bar which I think is a little steep for a chocolate bar or another reason.

But the other day I gave in and purchased one.

And today I thought i’d try it. It is a hazelnut chocolate bar nothing more nothing less and it simplicity is actually quite nice.

There is a large amount of chocolate crammed into its 65g and feels a lot more than its “mini” status. Apparently they do a 150g bar!!

I find sometimes large amounts of vegan chocolate can make me a little sicky but this was just the perfect amount, with the whole hazelnuts in it, they kind of balanced out the richness of the chocolate without being to dominant.

I still feel £1.99 is to steep for it however, but it was a tasty £1.99 and I probably would buy one may be as a pay day treat but I don’t think it would be my go to chocolate bar at that cost. 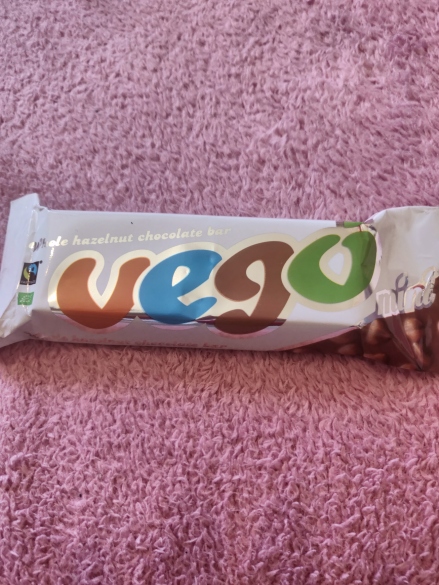